PHILIPP RÖCKER
*1984 in Aalen
lives and works in Düsseldorf 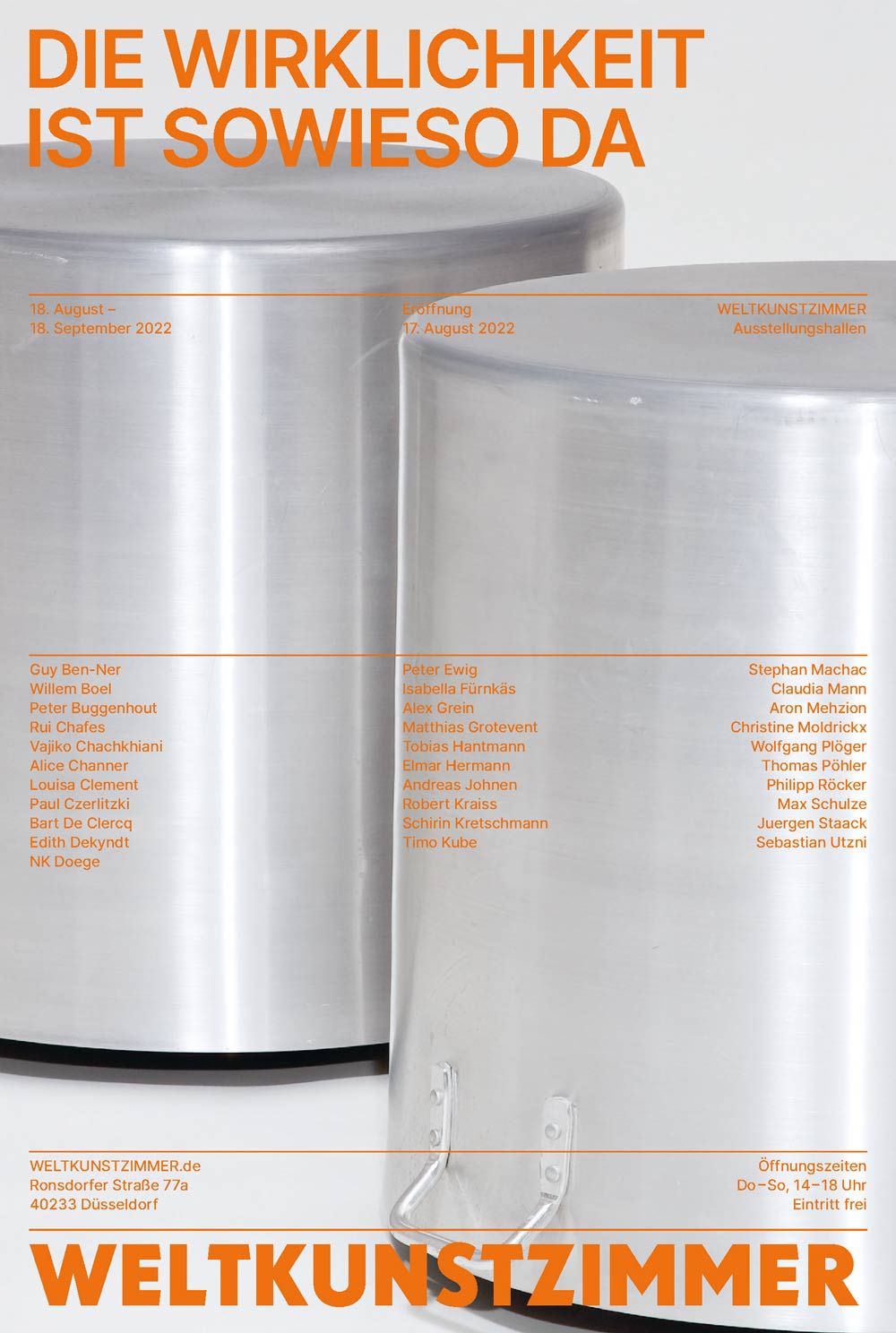 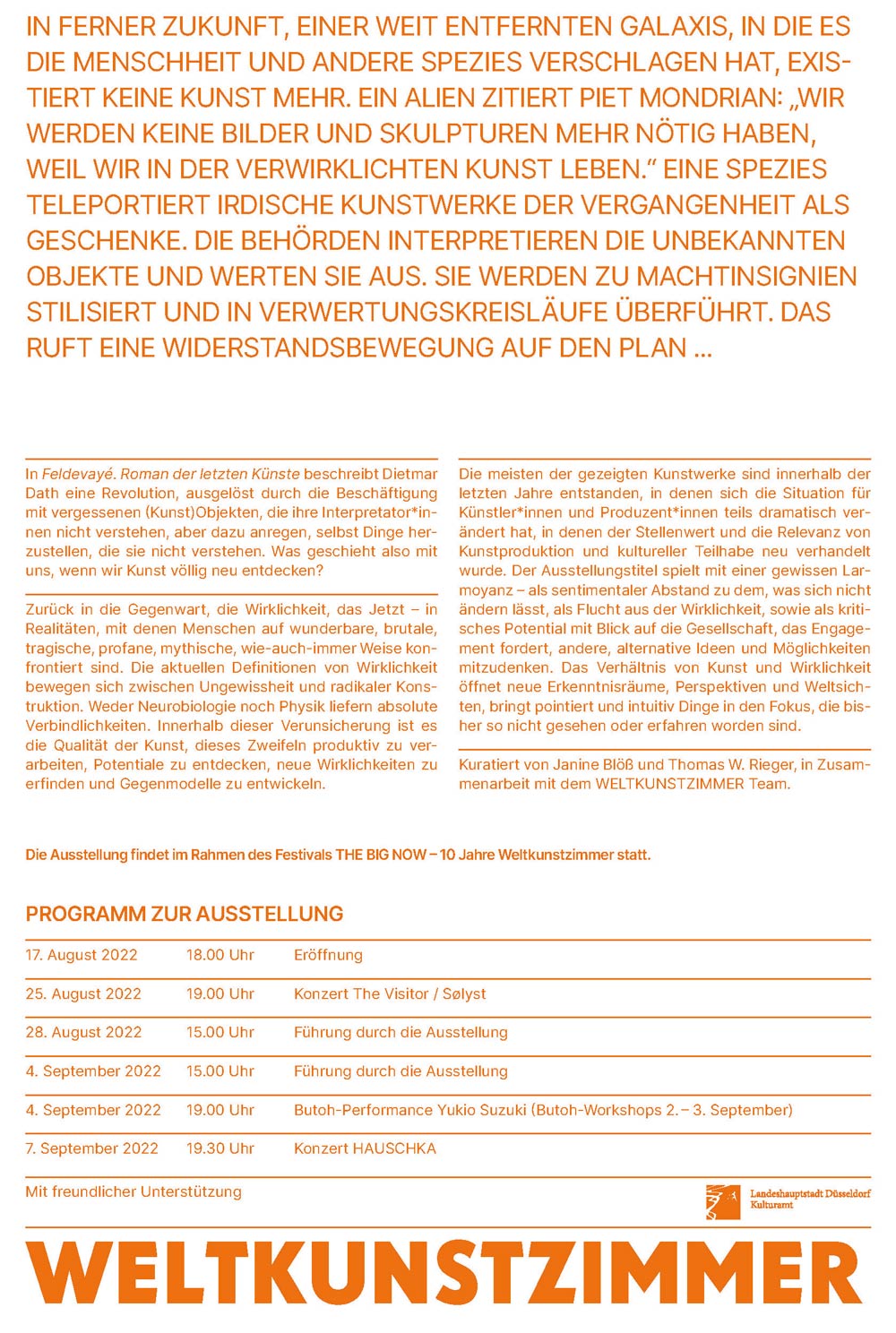 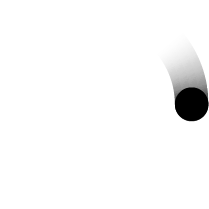 ...and maybe a gesture or drawing for a certain volume in space (pouce), 2022
bronze
4,5x5x5cm
writings, 2022
adhesive letters
size variable

while the sculptor originally hews the stone, philipp röcker rather lets it emerge. by questioning the notion of absence and the materiality of gesture, his monochrome works, made in the studio, reveal the sensitive qualities of plaster, concrete, clay, bronze or wood. using materials sparingly, his sculptures, as imposing as they are inconspicuous, evoke both elemental forms and rock deposits. guided by instinct and freed from any technical perfection, his works offer the viewer a form of devotion reminiscent of both cave paintings and contemporary geologies.

for the exhibition sentimental building, the artist presents for the first time a series of bronze works in different sizes and shapes, reflecting the careful and attentive handling of materials. gradually, he manages to transform the ephemeral into the imperishable. for example, he draws shapes in the sand with his finger, which he first casts into wax to be transformed into bronze later. each piece requires the special attention of the viewer - whether lying on the floor or leaning against the wall - in order to recognize the gentle irregularities as well as the fragility of a robust material. the raised display cases direct our gaze to a multitude of works that, depending on how they are combined, form a repertoire of different shapes - a letter, a volume, a cast. the artist combines his emotive works with paleolithic works, most of which are still mysterious today. thus, he offers his works the opportunity to become sculpture itself, contrasting the sublime bronze with the simple gesture.

This international exhibition is dedicated to photography as a source of inspiration for the visual arts. As examples, 31 contemporary artists of different generations have been invited, who use photographic images in the broadest sense as a starting point for their work: as a conceptual reference, as a sketch of ideas or as a formal basis for the further work process in various media. On display is a pictorial accumulation of snapshots, subject prints, prints, photocopies, magazines, and books, united in a room-sized installation.

the hand is becoming clay that shades the light embracing the night #9, 2021
stoneware, crate
35x30x28cm (without crate)

the hand is becoming clay that shades the light embracing the night #10, 2021
stoneware, crate
40x40x30cm (without crate)

the hand is becoming clay that shades the light embracing the night #8, 2021
stoneware, crate
20x27x26cm (without crate)

vor, hinter und jenseits des wissens (detail), 2019
patinated bronze, concrete
25x150x150cm
...the three bronze wedges seeming to prop up an invisible mass. it is a suggestion of weight and volume, allowing viewers imagination to finish the composition. it can also be read as a satire of sculpture in the landscape, a cast concrete intervention „correcting“ nature so that a manmade object can sit more comfortably with in it.
it's a work that rewards multiple viewings and readings...

the hand is becoming clay that shades the light embracing the night #5, 2020
stoneware
26x30x28cm

the hand is becoming clay that shades the light embracing the night #7, 2020
stoneware
37x40x34cm

the hand is becoming clay that shades the light embracing the night #8, 2020
stoneware
39x34x36cm

the hand is becoming clay that shades the light embracing the night #1, 2019
stoneware
26x30x28cm

the hand is becoming clay that shades the light embracing the night #2, 2019
stoneware
28x31x28cm

the hand is becoming clay that shades the light embracing the night #3, 2020
stoneware
28x28x35cm

the hand is becoming clay that shades the light embracing the night #6, 2020
stoneware
39x35x35cm

the hand is becoming clay that shades the light embracing the night #9, 2021
stoneware
35x30x28cm

the hand is becoming clay that shades the light embracing the night #10, 2021
stoneware
40x40x30cm

Concrete # is an exhibition series for contemporary sculpture on the former grounds of the Grünflächenamt Mitte, near the Kulturforum. Since April 2020, it is the new location for HAUNT home of the art collective frontviews. In addition to an exhibition pavilion, there is an overgrown courtyard area, of about 500 meters squared, which will be used for contemporary sculptural exhibitions and changing installations from the European scene over the next two years. Each year two conceptual editions of the series Concrete # will take place on one theme. Due to the setting, invited artists will be encouraged to develop thematically appropriate works, dealing with the conditions of the surrounding area.

"...or at least their outermost branches illuminated by the lamp with their leaves like feathers that gently shook against the background of the darkness, their oval folios, involuntarily tinted bright green by the electric light, which swayed from time to time like feather bushes, suddenly flickering as if of their own accord (and behind them you could hear a gradually spreading mysterious and delicate murmur, invisibly spreading out in the dark tangle of branches), as if the whole tree awoke, snorted, snorted, shook, then everything calmed down and they sank back into their motionlessness,..."*

Concrete #1: Respiration is the primary constellation of pictorial objects in HAUNT. The title refers to the breathing of the city. It is about the rhythm of time and space which has established itself between the buildings, the residents, the plants and the animals during the seven years of previous vacancy. It is definitely not the usual rhythm of the surrounding urban jungle. Without the activities of people, alternative exchange processes could developed on this site. Peace has returned, plants successively conquered the yard and the buildings, animals settled, and the surrounding breaths became slower and deeper. The first setting of works is intended to take up this slowed-down rhythm, to translate it and to maintain it for seven months through the summer, autumn and winter. Thus the exhibition is primarily sensual, it is linked to the quiet processes of urban nature in the yard; processes which had already spread there long before Corona.

form of the present-düsseldorf (performance), 2019
unfired clay, hammer, the artist

form of the present-düsseldorf (after performance), 2019
unfired clay, hammer
variable size
Within and beyond our grasp

in french, the word creux – from the verb creuser, to dig – denotes a cavity. in art, the term is predominantly used in the context of printing techniques, where gravure en creux designates intaglio engraving. but it also encapsulates the gesture of the sculptor who gives form to a mass by hollowing it out. appropriately, philipp röcker has on occasion described his work as ‘using the hollow of the hand to lend volume to the void’.
in his most recent works, the artist, who works between düsseldorf germany, and bordeaux, france, seems to reverse this process by suggesting the form qua absentia – that is, en creux. this is most obvious in the three-part sculpture vor, hinter und jenseits des wissens (before, behind and beyond our grasp, 2018), whose near-programmatic title refers to the individual stages of the creative process, from conception to form, which röcker deems complete when ‘the material transforms into a sizeable object that feels right – a counterpart’. regardless of the material or medium he uses – plaster, clay, wood, terra sigillata, bronze, aluminium – the resulting work always bears the physical imprint of the sculptor’s action.
in its latest iteration, the wedge, which in slender column-like forms such as levelscape (2016) or l’ombre (the shadow, 2018) functioned as a support to keep the sculpture level, or as an equally powerful, massive-matterist pendant (form of the present 2018), implicitly refers to something that no longer or not yet exists. it opens up the sculptural space for the interpretation of the beholder, who almost instinctively tends to assign a function or meaning to the resulting void. this play with presence and absence or with emptiness and fullness, can also be observed in other works most strikingly in the suggestively titled ein neuer ort (a new place, 2019), whose shape is reminiscent of shackles, but also in untitled, a semi-circular cut-out that seems to await further use. intriguingly, the word creux may also be used to express this explicit state of incompleteness. indeed, if a beholder makes a lecture en creux of a work, he or she attempts to derive something from it that is not explicitly expressed or present, but which attracts his or her attention precisely by its conspicuous absence – in the case of röcker’s work, the sculptural equivalent of ‘reading between the lines’, if you will. presumably, any such reading would dwell on the ambiguous symbolism of wedge and chain, which in turn could be interpreted as an expression of the artistic state of mind following a momentous change of place and culture. yet this, as the artist has made clear, ultimately lies ‘beyond’ our grasp.